Renowned ABC journalist, Virginia Trioli, has just taken the helm of ABC Radio Melbourne’s mornings program, described as “one of the most important meeting places in Melbourne”. 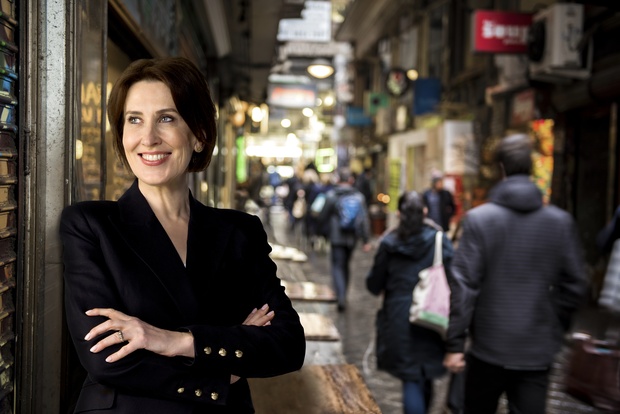 “Good morning Melbourne, Virginia Trioli with you on mornings on ABC Radio Melbourne, and it is so fantastic to be able to say that!”

These were the first words of Trioli on her first day in the role, which she commenced at 8:30 am on the dot on Monday, October 14.

The position has been handed to her by veteran broadcaster Jon Faine, who quite literally passed Trioli his on-air scripts tray during a special leaving ceremony on Friday, October 11, at the Melbourne Town Hall.

Faine – who has manned mornings for more than two decades – told Trioli long ago that “you have to absolutely be yourself” in radio... And that’s exactly what she plans to do in her new role.

This isn’t the first time Trioli has worked in radio.

The long-time ABC journalist hosted Drive for five years from 2000 to 2005 and the mornings  program on ABC Radio Sydney for two years in the mid-2000s.

It was while hosting Drive in 2001, that Trioli conducted her award-winning interview with former defence minister Peter Reith over the notorious Children Overboard Affair.

The interview went on to win her a Walkley Award, one of the highest accolades in journalism.

It was the second Walkley Award Trioli had received, after being recognised for her business reporting in 1995.

Trioli’s last position was as co-host of the ABC News Breakfast television program , a show which she helped launch in 2008 and which she presented firstly alongside Barrie Cassidy, and then with Michael Rowland from 2010.

Trioli is renowned for her rigorous interviewing style combined with a wicked sense of humour.

These are the qualities that have landed her the job on the mornings program, which she describes as a “once-in-a-career-opportunity” that aims to create “informed, entertaining, thought-provoking radio”.

Trioli says talk-back shows such as these and Q&A, the television panel discussion program where Trioli has been a regular stand-in host, play an important role in informing a critically-thinking society.

“There are fewer and fewer places in the mainstream media and on social media that are large meeting places for discussion and ideas,” she says.

“The segment engages a really broad cross-section of Australians ... in a meeting place where you can be challenged and where hopefully you can be heard as well.”

According to Trioli, there is an important function for such programs in a world where people tend to retreat into entrenched positions, rather than expanding their horizons.

“Our unofficial motto for the show is ‘bring your best debate and your brightest ideas, and let’s talk’,” Trioli exclaims.

In her first show on Monday, Trioli mentioned key issues which she hopes to address during her tenure, such as homelessness, urban planning and disability services.

In that first segment she also made an unfortunate error, when she claimed to be the first woman to host the Melbourne mornings program.

Trioli and the ABC later issued a correction, identifying the late broadcaster Elizabeth Bond as the first woman to permanently host the program during the 1970s.

Trioli is emphatic that the biggest challenge in TV and radio “is just to get it right”.

“That’s the most important thing,” she says.

Of course, slip-ups are bound to happen, and the ABC powerhouse was strikingly honest in her apology to her Melbourne-wide audience, saying: “My only excuse for getting that wrong was I wasn’t around then.”

“I know I am sitting in a chair that has been occupied by some of the greatest minds and greatest voices we’ve ever had in Australian radio,” Trioli continued.

“I’m well aware of that legacy and I hope very much to keep that well cared for.

“What we need to be careful of is, as you know, me with my rather salty mouth.”

Humour is central to Trioli’s practice, and she is no stranger to live slip-ups (she has a section on her Wikipedia page dedicated to “on-air gaffes”).

But it’s all part of the precarious game of live reporting.

In 2009, Trioli was famously caught on camera twirling her finger next to her contorted face, suggesting that conservative National Party senator Barnaby Joyce was crazy.

It was a dangerous moment for Trioli and the ABC, which had been under sustained attack for perceived bias.

But Trioli handled it well, immediately calling Joyce to apologise to him after the incident, and later revealing that she had been unbelievably jubilant that day – to the point of hysteria – after discovering that she may have finally been pregnant.

Trioli’s revelations of her battles with IVF were made during a speech at the Women in Media Conference, held in Queensland in 2018.

It was a speech which was particularly empowering for women.

Trioli addressed the challenges of being a woman in an industry founded on patriarchy, and spoke of incidents of sexual harassment, hard work, mistakes, regrets, loss and living an authentic life while maintaining the TV face which masks it all.

The speech received an “overwhelming response” from the community, with “hundreds of people” getting in touch in support of this honest, strong-willed and incredibly smart woman.

“I think it’s important [to specifically empower women] in any aspect of life, because as a feminist I simply want to see equality of access and equality of life for anyone, and particularly those groups who are being greatly discriminated against through time and over history,” Trioli says.

She also supports the worldwide #MeToo movement and its effectiveness in bringing victims across many industries to justice.

“I don’t think that any of us anticipated that it would somehow coalesce into an international movement where women said, ‘you know what, I actually need to be heard on this and there needs to be some accountability for it’,” she says.

“I think it has been a fantastically empowering thing.”

Trioli’s journey to her current standing has been a long and fascinating one.

She was born in Bendigo in 1965, and grew up as one of seven children in Nunawading, an outer eastern suburb of Melbourne.

Her father was born in Motta San Giovanni, a little town outside Reggio-Calabria, and arrived in Australia as a young boy.

As part of the pre-war wave of migration, Trioli’s father was naturalised early and encouraged to integrate into society.

He lost his Italian language skills, but later went back to learn it at university.

The young Virginia was the same; although her grandparents spoke Italian or English with a heavy accent, she learned only some words from them but later rediscovered her roots while studying Italian at university.

Trioli says she feels “incredibly, powerfully connected to Italy for a number of reasons”.

“That personal heritage with dad, the fact that we still have family there, but also, when I was at university I studied fine arts and for me the great Italian painters of the Renaissance are some of my most cherished and revered artistic figures,” she adds.

“They are the works that I love and I’ve been back a number of times to visit and revisit that art.

“My husband and I also got married in Italy... It’s a huge part of me actually.”

Although Trioli studied cinema and Arts at university, she says she always knew “that what mattered to me most was telling stories, and writing”.

“I’d been writing the whole way through university,” she adds.

“I was writing for the student university newspaper Farago, and once I got serious about ‘well what are we going to do now’, that’s when I applied to The Age for a cadetship, I sat the exam and I got in.”

It was the beginning of a 29-year-long journalism career which has seen Trioli bring clarity and insight to often complex issues, while maintaining her good humour.

Trioli concludes the interview by insisting she has never thought about her career in terms of goals.

“[My career choices] are never about what’s the next Everest to conquer or the next rung on the ladder to go up.

“It just has to be something that I see is going to be really interesting and a lot of fun.”

This story appeared in the Thursday October 24, 2019 edition of Il Globo.

There are fewer and fewer places in the mainstream media and on social media that are large meeting places for discussion and ideas.

Our unofficial motto for the show is ‘bring your best debate and your brightest ideas, and let’s talk’.