From February 3 to 5, the Sicilian city of Catania pays homage to its patron saint, St Agatha, with its most important religious festival of the year. 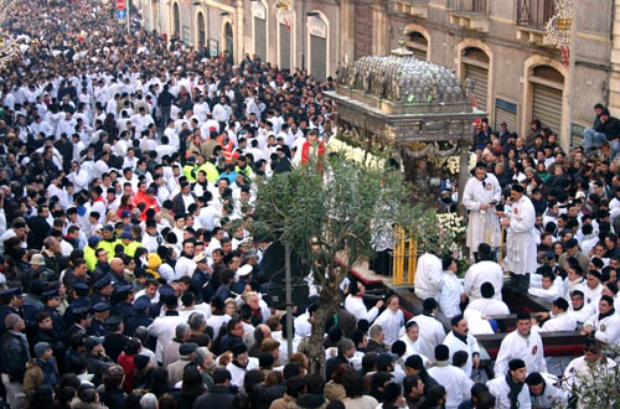 St Agatha of Sicily is a virgin martyr who was born in Catania or in Sicily’s capital, Palermo, AD 231.

She is one of seven women, who, along with the Blessed Virgin Mary, are commemorated by name in the Canon of the Mass.

St Agatha is the patron saint of Catania, Molise, Malta, San Marino and Zamarramala, a village in the province of Segovia in Spain.

The year after her death, the stilling of an eruption of Sicily’s Mount Etna was attributed to her intervention.

As a result, people apparently continued to pray to her for protection against fire.

One of the most highly venerated virgin martyrs of Christianity, St Agatha died during the persecution of Decius (AD 250 – 253) in Catania, condemned for her avid profession of faith.

Hailing from a wealthy family, St Agatha was pursued by a Roman prefect as a teenager.

She refused his advances, and he had her tortured in many ways, including the severing of her breasts, which is why St Agatha is often depicted holding her amputated breasts on a platter.

St Agatha was then sentenced to be burned at the stake, but an earthquake saved her from that fate; instead, she was sent to prison where St Peter the Apostle appeared to her, healed her wounds, and filled her dreary prison cell with light.

Her written legend includes “straightforward accounts of interrogation, torture, resistance, and triumph which constitute some of the earliest hagiographic literature”.

The annual festival in honour of St Agatha begins with a Mass at dawn on February 3 and culminates in an emotive procession through the city for which hundreds of thousands of locals turn out.

The two-day procession, said to be the second largest religious procession in the world, begins on February 4 and ends on her feast day, February 5.

The statue of St Agatha which houses her relics is placed on a fercolo, a 40,000-pound silver carriage, which is pulled up Mount Sangiuliano by 5000 men.

It wouldn’t be an Italian festival without food, drinks and a grand fireworks display at the end.

The small round fruit buns are iced and topped with a cherry, intended to represent breasts, and served or blessed on her feast day.

If you happen to find yourself in Sicily at the beginning of February, this festival is a must-see which will fill you with awe and emotion.