In the heart of the South Australian Outback, lies an otherworldly town that lives underground. 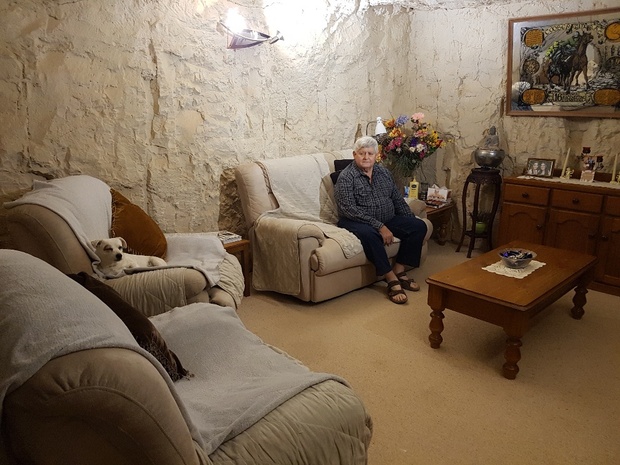 Bob Del Tedesco in the lounge room of his dugout. (Photos: Ronda Michell) 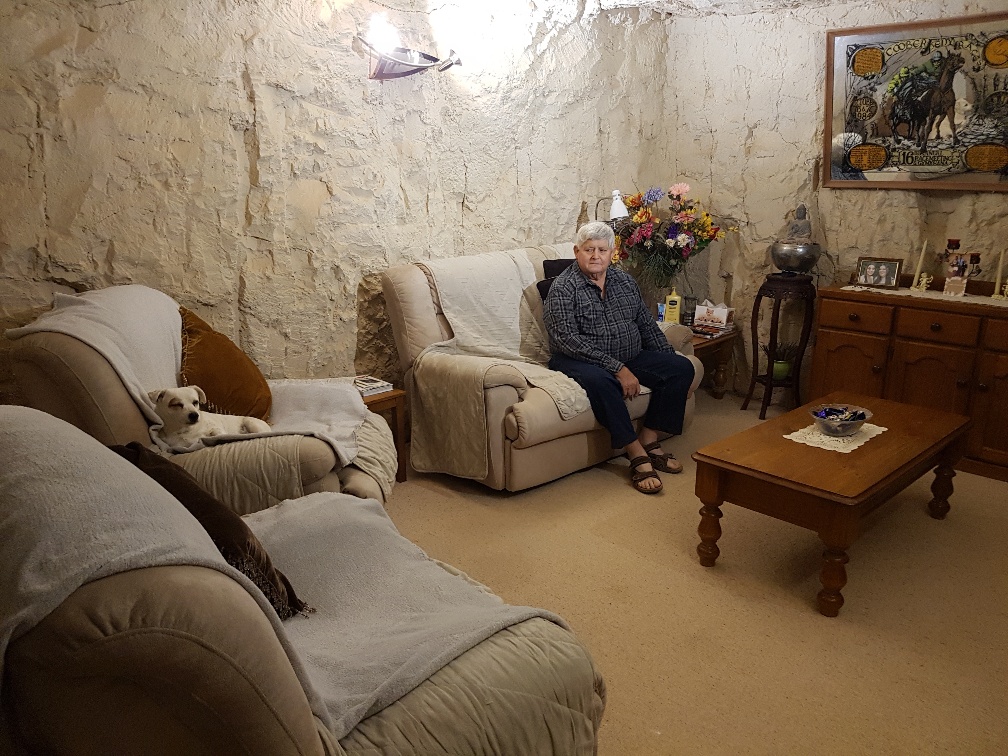 Bob Del Tedesco in the lounge room of his dugout. (Photos: Ronda Michell)

Dubbed the “opal capital of the world”, Coober Pedy is located in the middle of the country, halfway between Adelaide and Alice Springs.

Around 150 million years ago, the vast landscape was covered by an ocean, which helped create the town’s opal mines: when the water receded, the minerals from the ocean’s seabed filled cracks in the earth and created colourful opals in the terrain.

While the area was home to nomadic Aboriginal people for thousands of years, Europeans first arrived in 1916, lured by the elusive opal.

What began as perhaps the largest opal mining operation in the world has since transformed into a subterranean settlement, as many turned the mines into makeshift homes, known as “dugouts”, to escape the region’s scorching summers and cold desert nights.

The backdrop to many movies, Coober Pedy is famous for its sun-baked lunar landscape, fascinating history and quirky lifestyle.

Even grass is considered a commodity in the town, where the local (dirt) golf course provides golfers with squares of carpet for their tees.

But the most intriguing aspect of the community by far becomes visible only when you descend below the earth’s surface and discover a labyrinth of houses, hotels, shops, museums and churches, carved out over hundreds of years.

With a population of around 2500, the unique town survives off its opal supply and inquisitive visitors.

Despite its isolation, Coober Pedy is a vibrant mosaic of diverse cultures.

Around 60 per cent of the local community are of European descent, while the town has become home to migrants from South Asian countries such as Pakistan, India and Sri Lanka in more recent times.

In all, there are more than 45 nationalities represented in the town.

As well as being a government centre for Indigenous Australians, Coober Pedy boasts many cultural clubs founded by its European inhabitants, including the Serbian, Croatian and Greek clubs.

There’s also the Italo-Australian Miners Club, which was established in the 1960s and lives on today, thanks to the tireless work of local volunteers.

One of club’s early advocates is long-time Coober Pedy resident, 73-year-old Robert “Bob” Del Tedesco, who was its first licensee, as well as its manager for over two years. 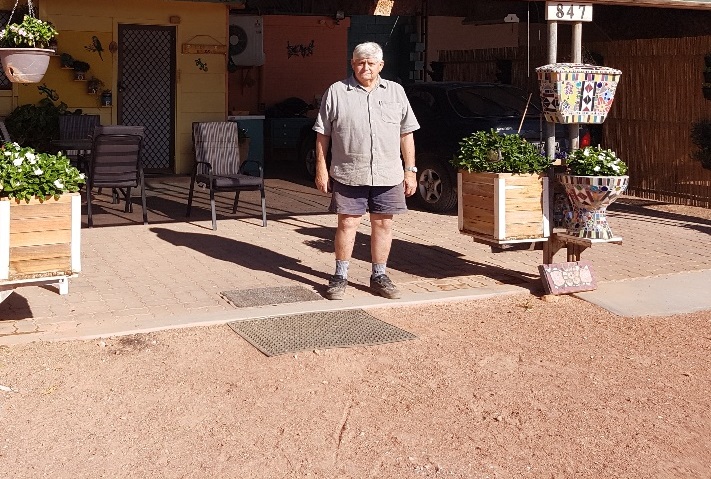 One of seven children, Del Tedesco was born and raised in an area of Adelaide that had a large Italian community at the time.

Both of his parents migrated to Australia from northern Italy in the 1920s and ‘30s: his father, Fiore, hailed from Friuli and his mother, Augusta, came from the Veneto region.

The Del Tedesco family had a 10-acre market garden and a grocery store in Campbelltown, as well as a butcher shop next door that was owned by Bob’s maternal grandfather.

“We mixed with the entire community there and – to put it mildly – my mum was a bloody saint in the area,” Del Tedesco says.

“She used to help all the Italians by interpreting for them; she was forever on call for doctors’ appointments and whatnot.”

Del Tedesco’s father was an avid miner, and the family spent a couple of years living in tents in the Harts Range, north-east of Alice Springs, so he could mine mica, a material that was once used in appliances that combined heat and electricity, such as microwaves and toasters.

“There would’ve been well over 200 Italians mining there in small groups,” Del Tedesco says.

When mica was replaced by artificial materials, the mining died off and the family moved back to Campbelltown.

“To go anywhere from the Harts Range you had to go through Coober Pedy,” Del Tedesco explains.

“The miners came through Coober Pedy and realised there was a good chance of making money, so in the late ‘50s, hundreds of them moved down from the NT.

“Because dad knew a lot of them from mining in the Harts Range, they used to pass through home and they got him all excited about mining again.”

In 1961, Del Tedesco’s father moved to Coober Pedy to mine opal, while his family stayed put in Campbelltown.

“Dad would come down every two or three months to visit,” Del Tedesco recounts.

Having finished his schooling and become a qualified bricklayer, a 20-year-old Del Tedesco followed his father to Coober Pedy in 1967.

Upon his arrival, he took over one of the old dugouts that the first miners had carved into the hillside to escape the oppressive heat.

At the time it was just a small, banana-shaped room for sleeping, but Del Tedesco was living with two of his brothers and a friend – and they all wanted their own bedroom.

During the day they’d mine opal and, afterwards, they’d spend hours with a “jack pick” (an air-operated hammer), carving into the ground and wheeling the soil out in wheelbarrows.

After around two years of backbreaking work, the dugout was transformed into a four-bedroom home that was gradually improved over time.

“It was a 25-metre-long tunnel with rooms running off it like a rabbit warren,” Del Tedesco says.

Today, the dugout features a modern kitchen, bathroom, toilet and ensuite off the master bedroom. 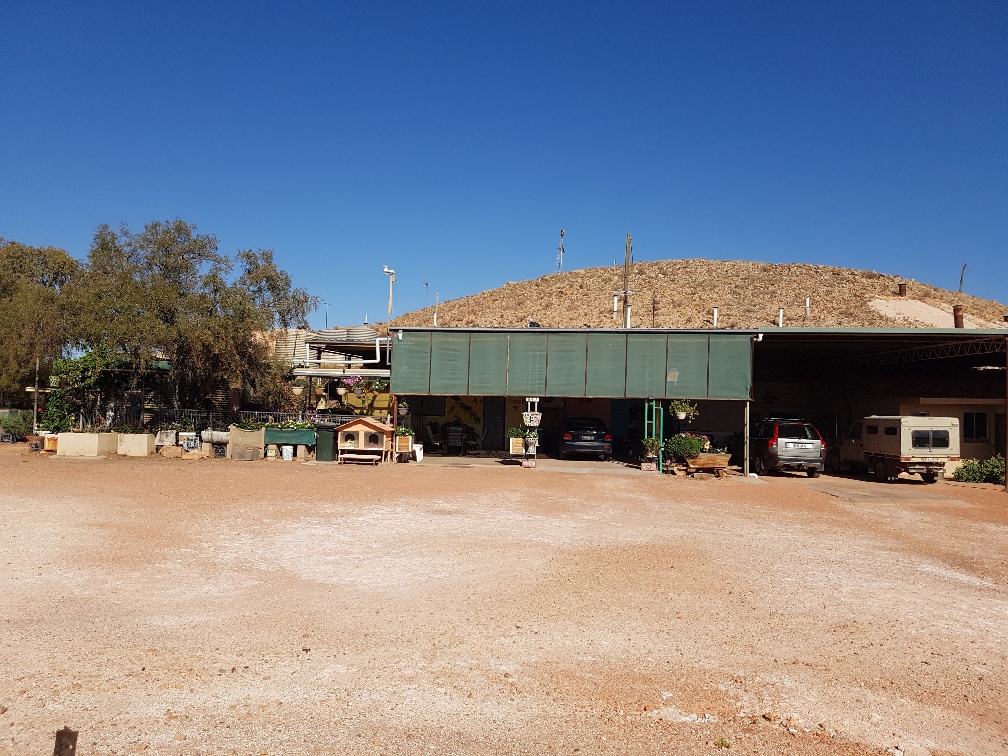 The exterior of Bob Del Tedesco’s dugout, which has been carved into the hillside

Some 80 per cent of the local population have made homes inside the earth, meaning it’s more common in Coober Pedy to live underground than above it.

“On my street there are about three houses and the rest are still dugouts,” Del Tedesco says.

The dugouts have all the amenities of traditional houses: internet access, electricity and water.

The only difference between “normal” homes and those in Coober Pedy is that the latter have no windows or access to sunlight.

This helps them maintain a comfortable, even temperature ranging from 19ºC to 25ºC day and night throughout the year.

“The beauty of the dugout is that you can sleep day or night and it doesn’t make any difference,” Del Tedesco says.

“It’s dead quiet, pitch black, and beautiful and restful, which helps you put up with the heat during the day.” 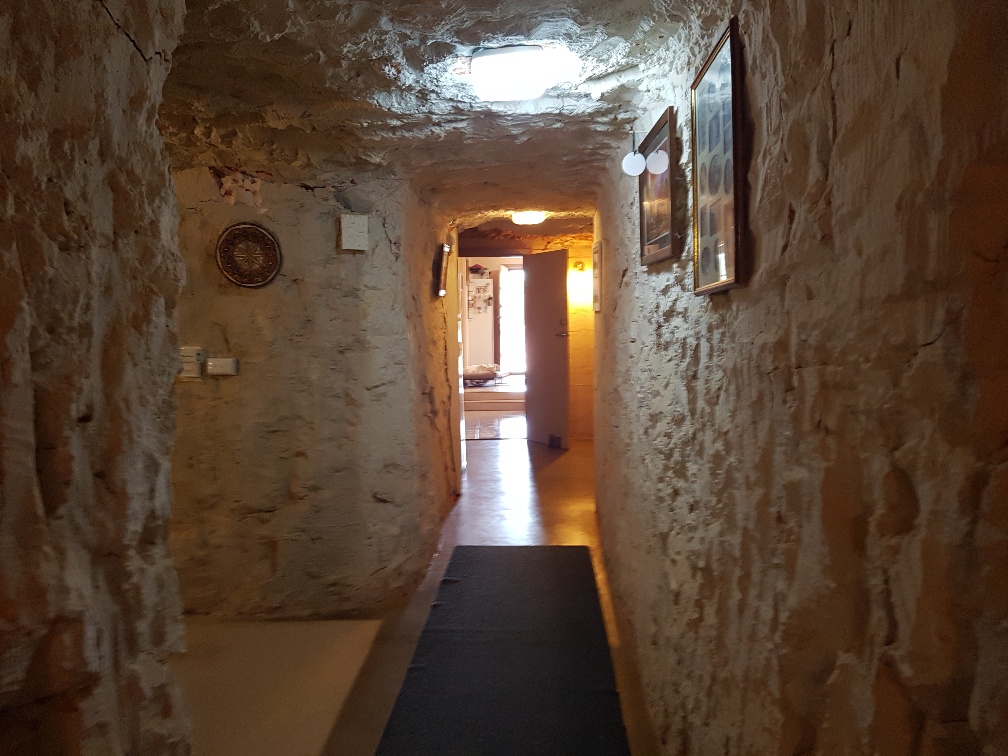 The interior of Bob Del Tedesco’s dugout, which has no windows or natural light

The dugouts have become more advanced over the years, as have the remote town’s resources and access to the outside world.

When Del Tedesco first moved to Coober Pedy, the town had no telephone connection and its only form of contact with those beyond its borders was the mail truck that passed through once a week, as well as telegraphs relayed via the Royal Flying Doctor Service’s radio.

The town also had no electricity and locals had to generate their own power.

“We had no water either; the water plant that the CSIRO installed ended up blown to pieces with the wind,” Del Tedesco says.

“We were on water rations until the early ‘70s.”

“Port Augusta is our nearest major town, and that’s 540 kilometres away,” he explains.

“It’s a nine-hour drive to Adelaide from here and almost as far to Alice Springs.”

Having spent decades working in construction to fund his mining expenses, as well as working part time at local hotels as a way of socialising and meeting new people, Del Tedesco retired around five years ago.

But he and his partner of 16 years, Ronda, are still active members of the close-knit community (the latter is the secretary of the RSL and the local representative for the Liberals).

While Del Tedesco has ventured far and wide, from New Zealand to Canada and Italy – where he visited his parents’ hometowns – he’s proud to call Coober Pedy home.

“It’s been a great life here,” he declares.

“A lot of people ask how we could live here with the dust and the heat.

“I look at them and say: ‘Have you ever smelt the air in the cities and seen the smog?’

“Here, you can brush the dust off and you’re clean again.”