Giant colourful park benches are peppered throughout the countryside of Piedmont, taking adults on a treasure hunt and making them feel like children again. 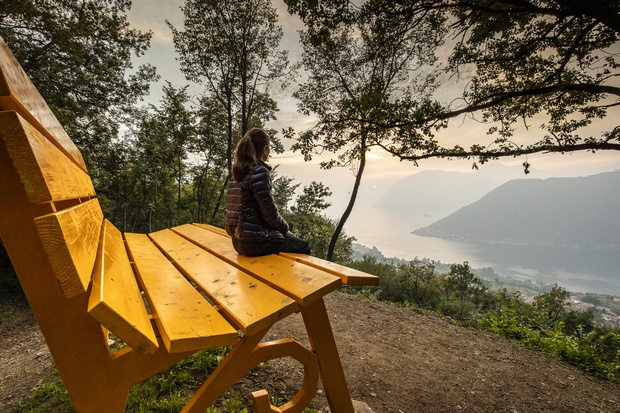 These unique installations have become a popular attraction for tourists and locals alike.

The larger than life benches allow visitors to slow down and get back in touch with their inner child while soaking up the spectacular surroundings.

The benches are the brainchild of American designer, Chris Bangle, who has lived in the Piedmontese village of Clavesana since 2009.

Upon moving to the tiny Italian town, he and his wife Catherine set up The Big Bench Community Project (BBCP), a non-profit initiative which aims to give back to the communities which host the benches.

The aim is that, when you sit on one of the benches, legs dangling beneath you, you feel like a child again and experience the wonders of the world around you with a fresh perspective.

The benches – that come in all the colours of the rainbow – are also so big that there’s plenty of space to share them, and to interact with friends or strangers.

The first bench, a red one, was installed in Clavesana.

There are now 112 privately financed benches in Italy, and even one in Scotland.

Many of the benches are located in The Langhe, the hilly area that’s home to Clavesana, but they’ve also spread to the regions of Lombardy, Veneto, Emilia-Romagna and Tuscany.

While there are maps and even an app to guide you to each location, part of the Big Bench experience is to go on a treasure hunt to discover them and the views they offer.

The Big Yellow Bench stands in the gardens of a family-run farmhouse hotel and restaurant, while the Big White Bench is situated near an old tower that was previously hidden by overgrown pine woods in the village of Vezza d’Alba.

The Big Blue Bench is located in the Gallo family vineyard, which dates back to 1795.

With each bench that’s established, the BBCP issues a personalised stamp to businesses in the immediate vicinity, such as restaurants and bars, which can then use it to frank the famous Big Bench Passport of any visitor that requests it.

Bangle and his team have also developed a series of promotional objects inspired by the benches, as a memento of each visit or as a gift to friends and family after a trip to the region.

The objects are created in collaboration with local artisans.

Aside from its cultural and touristic value, the initiative also aims to support local enterprise, tourism and craftsmanship in the towns that host the out-of-scale installations.

“The mission of the BBCP is to expand positive aspects to that the Big Benches bring to people (both builders and visitors) and communities (mainly tourism but also a great dose of local pride) by facilitating and curating their distribution and construction,” Bangle said in an interview with Turin Italy Guide.

All of the proceeds from the initiative are invested back into the local communities that host the benches.

For each community a specific need is identified, with precedence given to students, schools and civic groups.

More broadly speaking, Bangle also hopes that the initiative shows people that “peace and joy and inspiration can be had so simply and easily”.

The message seems to be catching on: the BBCP says it has received requests have from the USA, Canada, New Zealand, Wales and Lebanon, just to name a few.

But for now, the benches are the perfect excuse to head to Italy... as if we needed one!