The Melbourne Cup: it’s the race that stops a nation. But in recent times, it’s also been an event that’s seen a spate of tragic deaths, with seven horses killed during its running in the past eight years. 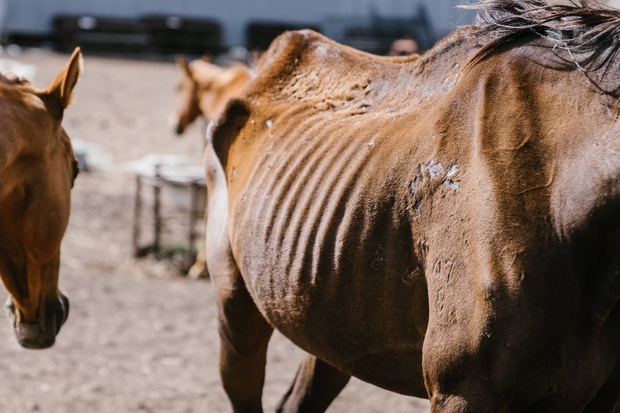 Photo: The Coalition for the Protection of Racehorses 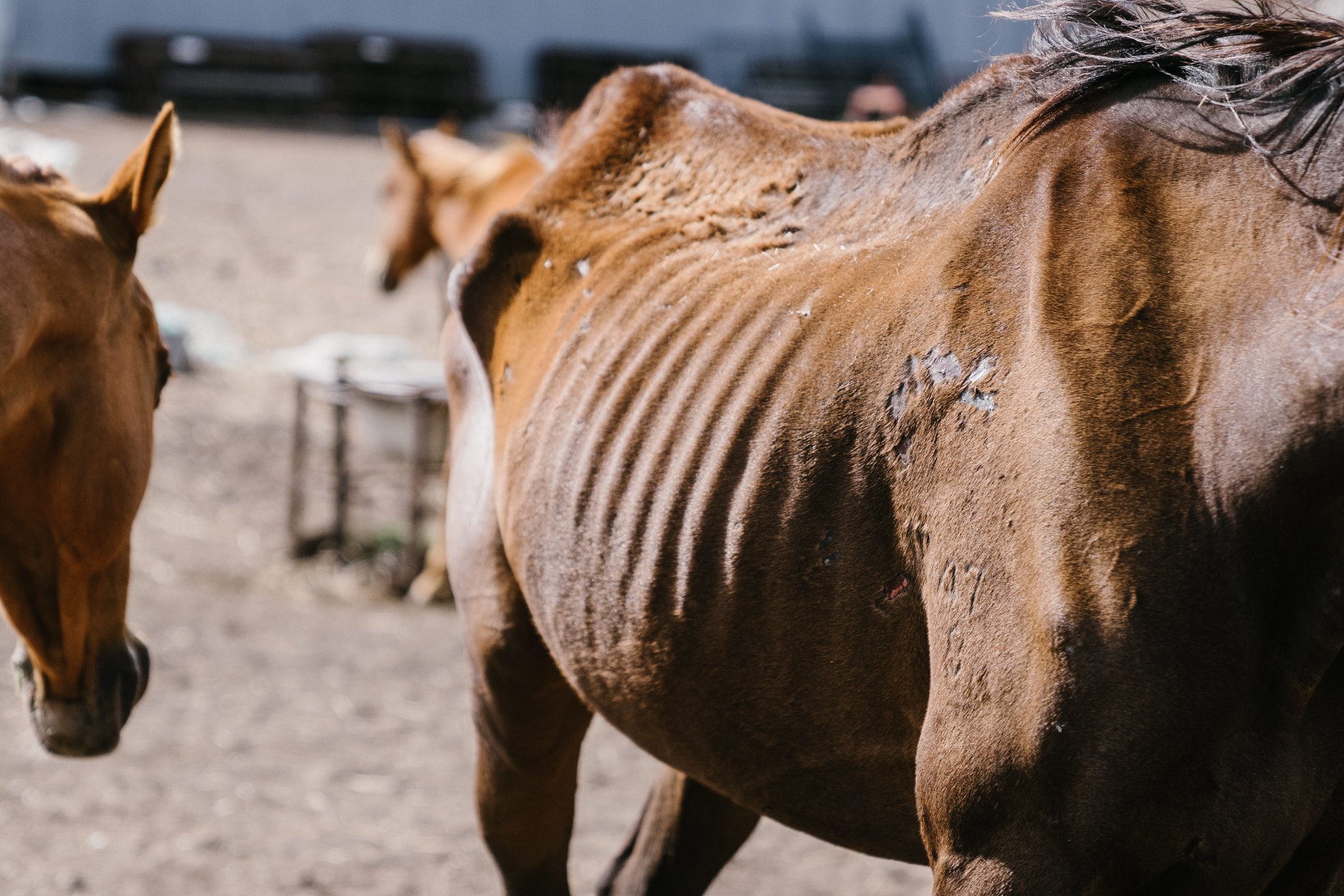 Photo: The Coalition for the Protection of Racehorses

One of this year’s pre-race favourites, Anthony Van Dyck, became the latest Cup casualty, when he was euthanised after sustaining a fractured fetlock late in the race.

The death of the five-year-old stallion has sparked widespread outrage and reignited the debate surrounding animal welfare concerns related to the horse racing industry.

“The fatality report gives consideration to the circumstances of the incident and any potential learnings to assist in the prevention of similar injuries in the future,” he said.

But animal rights activists aren’t buying it, arguing that the staggering death toll at the Melbourne Cup, and other races across Australia throughout the year, is unacceptable and a “national disgrace”.

“The death of Anthony Van Dyck is no ‘freak accident’,” Animals Australia tweeted.

“A horse dies at least once every three days in Australian racing.

“The risk is known, but deemed to be a risk worth taking in the pursuit of gambling profits.”

The death of Anthony Van Dyck is no "freak accident". A horse dies *at least* once every 3 days in Australian racing. The risk is known, but deemed to be a risk worth taking in the pursuit of gambling profits.#NuptotheCup #MelbourneCup

The Deathwatch Report 2020, released in July by the Coalition for the Protection of Racehorses (CPR) indicates that 116 horses had been killed on Australian tracks in the past year for a number of reasons, most commonly due to a catastrophic front limb injury (59).

Other causes of deaths include cardiac problems, massive bleeds and head trauma.

This figure isn’t exceptional; in fact, it’s the lowest in seven years, with 137 deaths recorded in 2017.

The CPR cites underdeveloped horses competing in two-year-old racing (which often predisposes them to further injury if they don’t break down at that age), the relentless beatings of overtired horses with the whip and the placement of hurdles in front of horses in a group at a fast pace in jumps racing, are all welfare issues which contribute to a high number of deaths and injuries in the industry.

The CPR’s campaign director, Elio Celotto, was at Flemington Racecourse on Tuesday to protest the Melbourne Cup and the horse racing industry at large.

“We were surprised to see another horse die because we didn’t understand how Racing Victoria could possibly allow another death to occur after the bad run the Melbourne Cup has had over the past few years,” Celotto said.

“When people say it’s an unfortunate incident, it’s not at all.

“When it comes to huge prize money, [owners and connections] will do everything they possibly can to get their horse across the finish line first, to the detriment of the horses that really don’t have a say in what happens to them.” 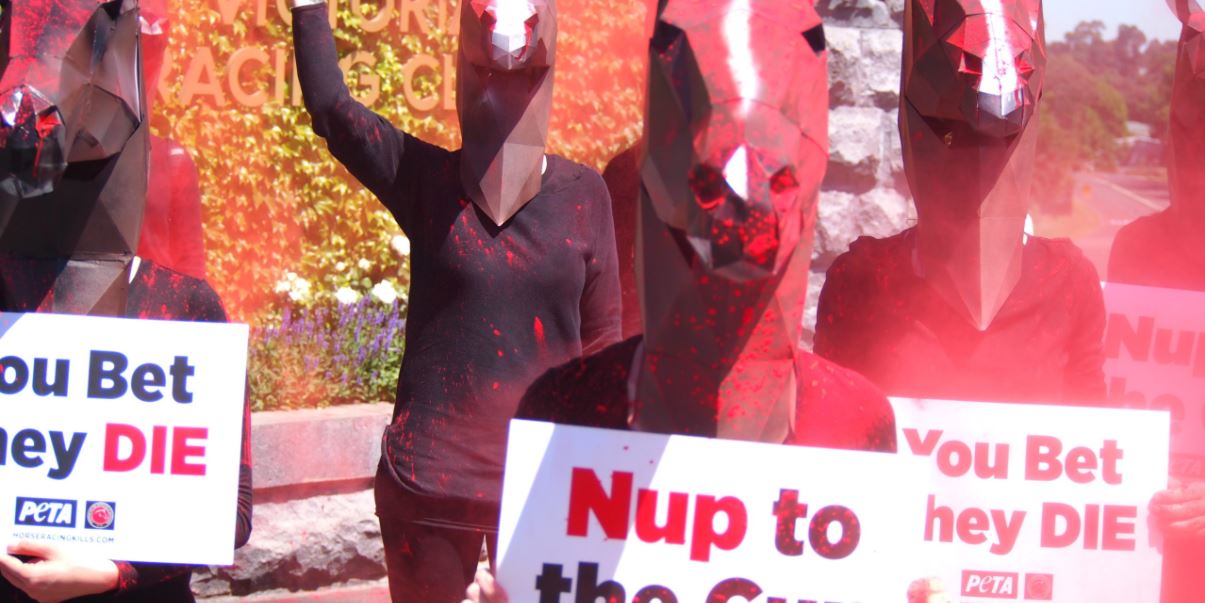 The CPR joined forces with People for the Ethical Treatment of Animals (PETA) to protest against the Melbourne Cup on November 2, 2020. (Photo: NkT Photography)

The son of Italian migrants from Treviso and Trieste, 58-year-old Celotto works tirelessly to give a voice to not only the horses that die on-track, but also those that are subjected to cruelty, abuse and an early death behind closed doors.

“After essentially running for their lives, once they lose the ability to race, there’s no guarantee that they’ll end up surviving.”

Thousands of horses die every year from racing-related injuries off the track in training, or are killed prematurely when they’re no longer commercially viable, known as “wastage”.

A two-year investigation by the ABC’s 7.30 Report, which aired in 2019, irrefutably exposed the Australian horse racing industry’s poor treatment of retired racehorses.

The exposé mentioned official data from Racing Australia that claimed less than 1 per cent of retired horses ended up in an abattoir, equating to roughly 34 horses a year.

The investigation revealed that those statistics were far from correct and that the actual numbers were much higher.

Celotto said in the report that at just one of the abattoirs, 34 horses had been killed in a single week, slaughtered for pet food or human consumption.

“It equates to about 4000 racehorses killed in this one abattoir alone,” he added.

The program also showed audiences footage of how ex-racehorses were mistreated in the abattoirs – stuck in boxes unable to move, lashed, kicked, stomped on and terrorised.

Racing Australia responded to the report with a statement, announcing that the “provision of appropriate care and attention of thoroughbred horses is a critical priority in the administration of racing across Australia and for the people involved in the sport”.

The statement also said that the organisation had invested “tens of millions of dollars in integrity, veterinary services and equine welfare programs to try and achieve the best possible outcomes for horses”.

But a year later, the industry has taken only a few small steps in the right direction.

According to the CPR, the racing industry currently generates around $21 billion dollars every year in betting revenue alone, yet does not have a mandatory plan to ensure that all retired racehorses are re-homed and get to safely live out their natural lives.

“Different states have their own retirement plans for racehorses, but none of them look after all horses,” Celotto explained.

In 2013, the CPR submitted a proposal to the Australian racing industry, calling on it to use 1 per cent of prize money, as well as 1 per cent of all betting turnover, to establish a national retirement plan for horses.

V’landys said the funding would initially start off with a $2 million investment (or 1 per cent of prize money) for the retirement and rehabilitation of racehorses in NSW.

“That’s not happening and will probably never happen,” Celotto said.

“But he keeps on saying it because it sounds good.

“The industry is only bringing about changes enough to give the impression that it’s doing what it needs to do, when really it’s not.”

Last year, Racing Victoria announced a commitment of $25 million to the welfare of thoroughbreds in Victoria, with an immediate focus on their post-racing wellbeing.

But the CPR’s detailed retirement plan budget suggests that these funds aren’t nearly enough to deliver an effective solution.

“You not only need land, but you need vets, stablehands, farriers and administrators,” Celotto said.

“If they’re serious about it, they need to spend a hell of a lot more money.

“We’re talking to Racing Victoria at the moment, quite regularly, and I think they’re taking some positive steps, but they’ve still got a long way to go before being slightly acceptable to us.”

The racing industry brings in big bucks for both state and federal governments through gambling, making it almost untouchable at a political level.

Celotto believes that before the industry is willing to change on its own terms, it’s more likely that horse racing will become less popular over time as people discover its dark secrets.

Young protesters participate in a CPR demonstration. (Photo: The Coalition for the Protection of Racehorses)

He’s optimistic that society will realise supporting the industry by attending events and gambling on horses is unnecessary in a world where you can bet on almost anything – even the winner of the US election.

“Back when we started, to criticise the Melbourne Cup was akin to blaspheming,” he said.

“Since then, there’s been a shift in the psyche of the average Australian.

“The hashthag #NupToTheCup has been trending for the past few years on Melbourne Cup Day, and attendance at the event has dropped by around 30 per cent over the past decade.”

The surge in anti-racing sentiment is also evident in the high number of “Nup to the Cup” picnics and events held around the country on Melbourne Cup Day.

In pre-COVID times, the CPR held its own annual picnic, just up the road from the entrance to Flemington Racecourse.

“When we started there were around 20 of us; we were there to show anyone who came past on their way to the races that we were having a good time without being a part of that,” Celotto said.

The CPR has expanded to New Zealand and is currently working with the Italian Horse Protection Association (IHP) to help conduct investigations in Italy, as well as collaborating with similar groups in Switzerland, America and England.

“We’re trying to spread the message around the world,” Celotto concluded.

“It’s all about education; I think that nearly all people care about animals and if they knew the truth about what happened, they wouldn’t support horse racing.”