Italy to build retractable floor at the Colosseum

Italy plans to construct a new a high-tech retractable floor over the ruins at the base of the Colosseum to allow visitors to enjoy views from the ancient amphitheatre’s centre and to host high-level cultural events. 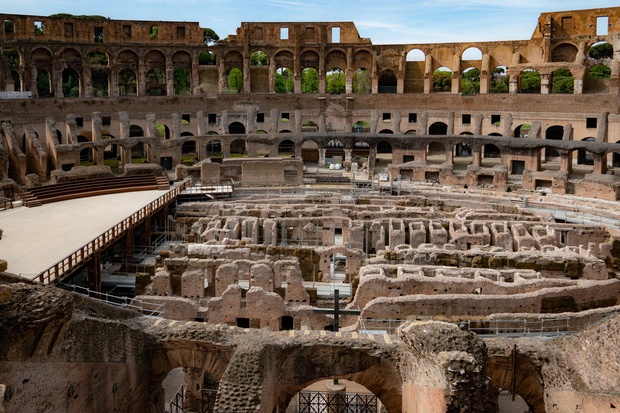 Italy’s culture ministry has launched an €18.5 million tender to rebuild the arena floor of the Colosseum, rendering it the way it was until being fully exposed about a century ago.

“It will be a major technological intervention that will offer visitors the opportunity not only to see the underground, as today, but to contemplate the beauty of the Colosseum from the centre of the arena,” Culture Minister Dario Franceschini said.

The “compatible and reversible” floor would “allow the public to fully understand the use and function of this icon of the ancient world, also through cultural events of the highest level”, the statement on the culture ministry’s website reads.

In the days of Imperial Rome, the sand-covered wooden arena floor was built over the network of tunnels and cells where animals and gladiators were caged before contests began.

Fully accessing the arena’s stage area - where everything from gladiator battles to executions and countless other public spectacles took place – hasn’t been possible since ancient times.

The idea of rebuilding the Colosseum arena was launched in 2014 by the archaeologist Daniele Manacorda and was strongly endorsed by Franceschini, who tweeted at the time: “All that is needed is a bit of courage.”

Now it would appear that both the courage and funding are there.

The call for all international tenders is open until February 1 and works are expected to start in 2021 and be completed by 2023.

The Colosseum is currently closed due to Italy’s COVID-19 restrictions.