July 19, 2015, will forever be engrained in Mick Fanning’s memory as the day he wrestled with a shark and lived to tell the tale. 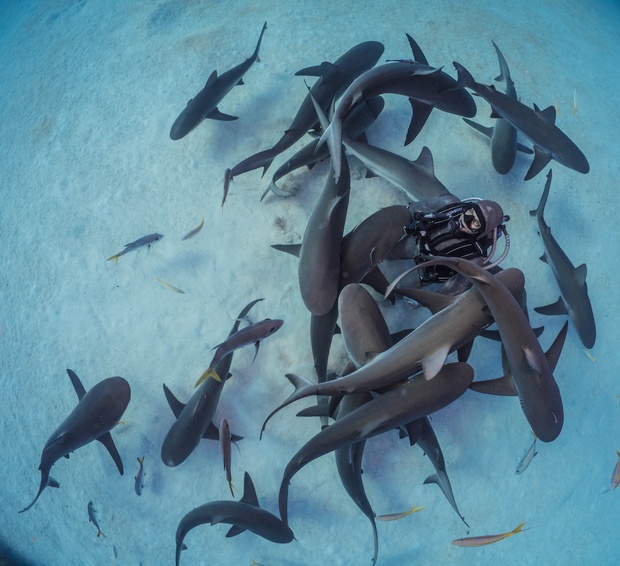 Cristina Zenato with her sharks in the Bahamas. (Photo: Paige Colwell) 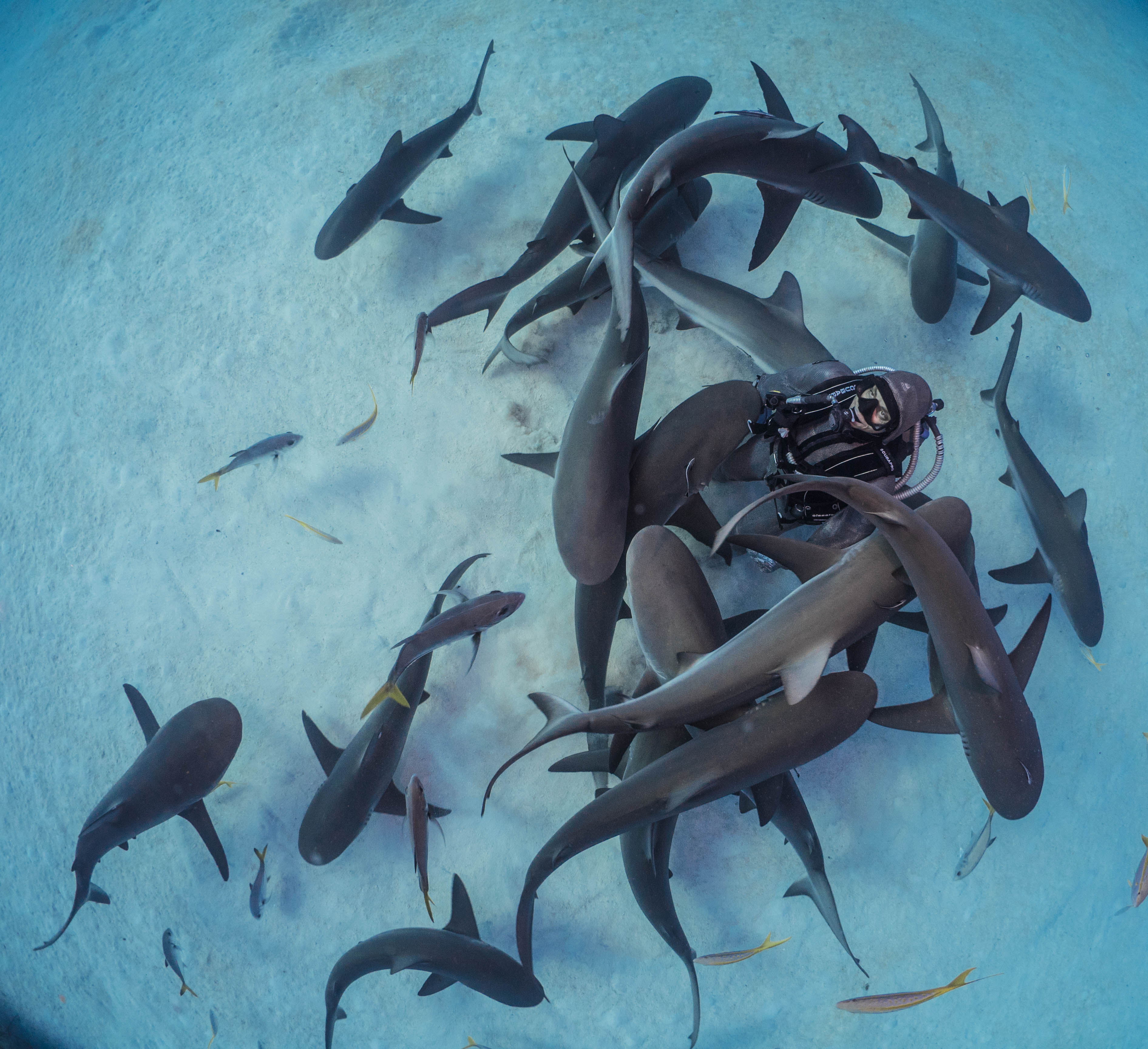 Cristina Zenato with her sharks in the Bahamas. (Photo: Paige Colwell)

The attack was captured live on camera during the J-Bay Open surf event in South Africa.

Fanning appeared visibly shaken after making it back to shore unharmed.

Five years later, the retired triple world champion is returning to the open waters to conquer his fear of sharks and better understand them in his new documentary, Save This Shark.

The two-part doco follows Fanning around the world in a quest to investigate the issue of sharks versus people, debunk common misconceptions and learn about the latest technology helping humans and sharks safely co-exist while saving them from extinction.

In order to face his fears and discover the truth about sharks, Fanning has teamed up with leading experts from around the world, including renowned Italian shark behaviourist and conservationist, Cristina Zenato.

Fanning isn’t the first high-profile person to call on Zenato’s expertise, and back in 2018, Will Smith also spent time with her to overcome his fear of sharks.

Known as “the shark dancer” in her home in the Bahamas, and “the shark whisperer” or “the mother of sharks” more broadly, you could argue that Zenato spends more time in the water than on land.

And it’s been that way her entire existence. 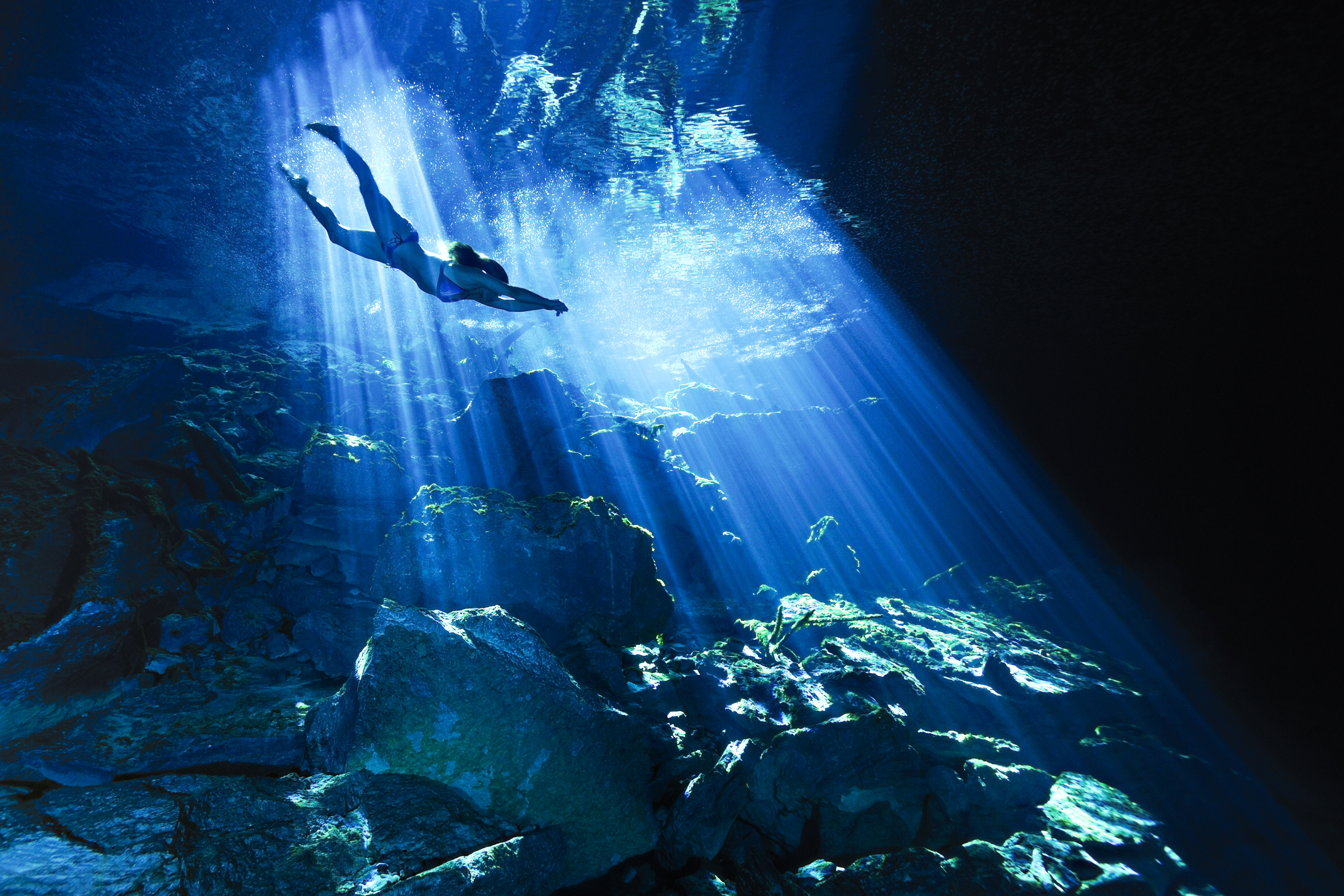 Born in Italy, Zenato grew up in the African rainforest, where she developed a passion for nature.

She inherited her affinity for water from her parents.

Her father was a special forces military diver from Lake Garda, near Verona, and her mother hails from a “family of the ocean” in Sanremo, on the Ligurian coast.

“My passion for water goes back to even before my memory was formed,” Zenato says.

“When I was a baby, if I was fussy my mother would draw a tepid bath and lay me in the water.

“As soon as she put me in the water, I’d be instantly calm.”

Zenato was swimming at sea as young as three years old and she grew up freediving, foraging for stones and shells on the ocean floor for hours at a time.

From the age of eight, she dreamt of two things: becoming a scuba diver and having sharks as friends.

Zenato’s family moved back to Verona when she was in her teens, and she went on to study languages at university, pursuing another lifelong interest.

She learnt her first foreign words when she was just a toddler and she told her mother she was thirsty while on an outing.

Her mother responded: “Go up to that gentleman and say ‘un verre d’eau s’il vous plaît’ (which means ‘a glass of water please’ in French).”

“I repeated these words, which had no meaning to me, and a glass of water appeared,” Zenato exclaims in awe, as though she were reliving the moment.

Zenato now speaks Italian, English, French, Spanish, German and Pidgin Signed English (PSE) – as well as “Shark” – and her knowledge of languages eventually brought her back to the ocean.

At the age of 22, the ambitious Italian headed to the Bahamas to learn how to scuba dive.

What was meant to be a holiday became the final stepping stone in the path to her destiny.

“I ended up changing my life within a week and I basically decided to pack up everything in Italy and make the island my home and diving my life,” she says.

Twenty-six years later, Zenato’s fieldwork with sharks and caves allows her to bring to the surface a unique perspective on the world we live in.

While she’s encountered over a dozen different species in various locations, her primary work is with Caribbean reef sharks in the Bahamas.

Zenato has built a special relationship with these sharks: she knows their names, their personalities, their scars and their life stories. 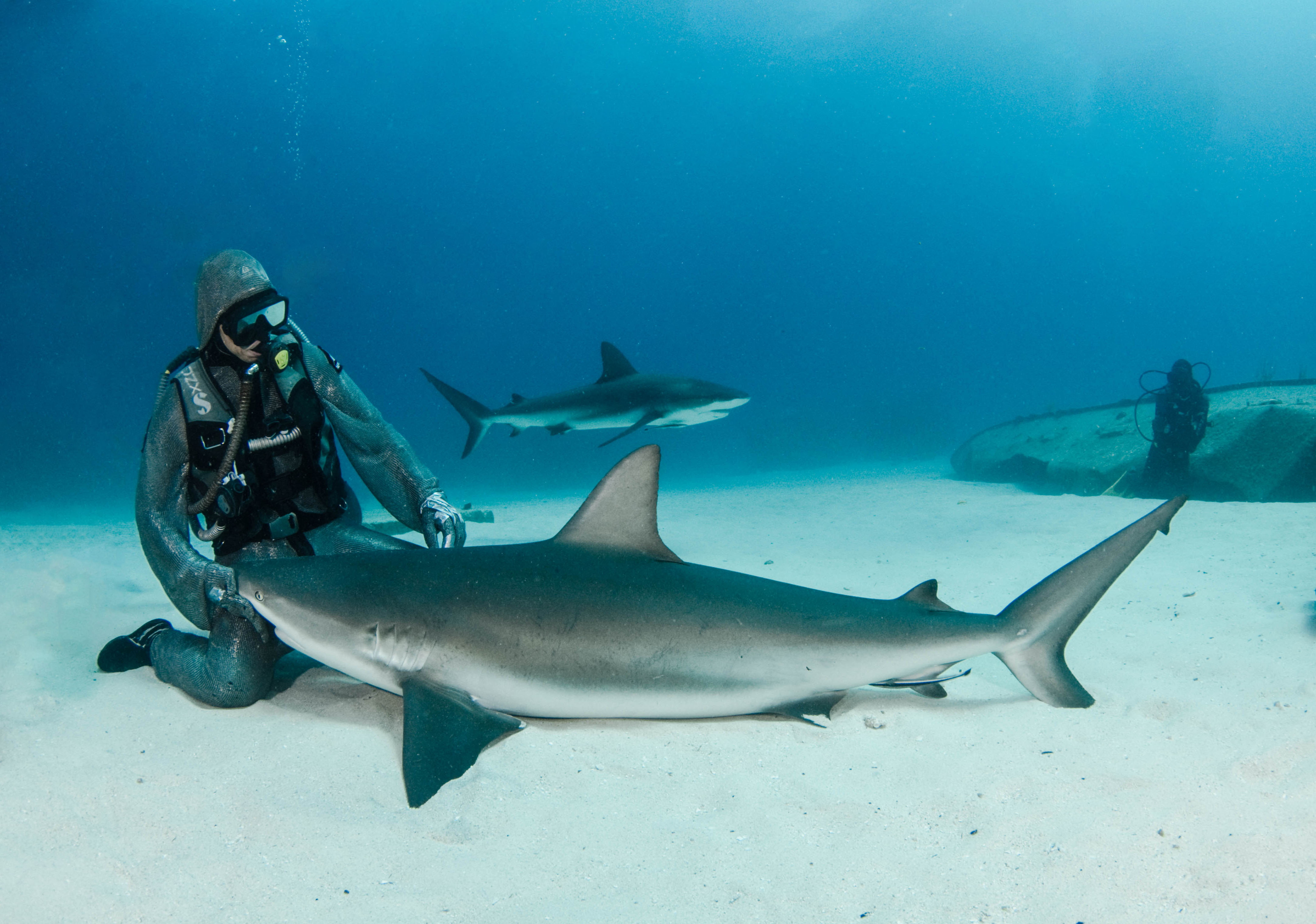 Cristina Zenato with Grandma, one of her oldest shark friends. (Photo: Cristina’s Library)

There are around 15 sharks she always sees on her dives, as well as others that come and go over time.

Zenato has known some of the sharks for 13 years.

“It took a few years to get their personalities but I noticed their physical differences quite quickly... within months, maybe the first year,” she says.

One of Zenato’s oldest shark friends is Grandma, named after her gentle nature, but also because of her light grey colouration, similar to the hair of an ageing woman.

Then there’s Stumpy, who’s missing a small piece of her tail, and Black Spot, who looks as though she’s wearing a pirate’s eye patch on one side.

All of the sharks have their own quirks, and some like to be petted, while others prefer to swim around Zenato at a comfortable distance or rub up against her body.

Zenato is one of the first in the world to have been able to induce a state of relaxation in Caribbean reef sharks through gentle touch.

To the observer, it looks like the shark is falling asleep in her lap as a kitten would.

In a poignant scene of Save This Shark, Zenato calms one of her sharks before gently placing the huge animal in Fanning’s lap underwater, so still and comfortable in his arms that he’s able to lean down and kiss her.

“Mick was very happy and he had a sense of wonder at what he’d just been able to experience,” Zenato recounts.

“He said it was one of the most amazing experiences that he’s ever had.”

Today I got to witness the Mother of Sharks @cristinazenato feed her beautiful children. This woman is incredible the way she reads sharks, understands them and feels what they feel. She puts them to sleep in her lap as a dog or cat would comfortably lay and be pampered with love. So in awe of her story, journey and her magical gift. Thank you!! @taylorsteele @natgeoau @thisfilmstudio

With the sharks in such a relaxed state, Zenato can also get close enough to remove hooks from their mouths, relieving them from pain and consequent health complications.

Over the years, she’s collected around 300 hooks, which have become a symbol of her work and a tool to open up the conversation about sharks and why we need to protect them.

“The biggest misconception about sharks is that they’re not perceived as living, breathing beings,” she says.

The word “shark” generally conjures up images of an ominous, stone-cold predator with razor-sharp teeth.

But Zenato explains that there are more than 520 species of sharks and the smallest is the size of a pen.

One the other end of the spectrum, a whale shark can reach lengths of 40 feet or more, but they eat plankton and are far more likely to perceive humans as predators rather than prey.

While certain species pose a threat to humans, Zenato stresses the need for a healthy respect for these animals when we venture into their home.

“Sharks aren’t man-eating monsters, but in certain circumstances, we may put ourselves in the same position where their food is and we come into what I’d call crossfire,” she says.

“We have to understand that it’s their ocean and they don’t have a choice... we do.”

While sharks are often described as majestic and powerful creatures, the word “vulnerable” is one we don’t hear as much... but perhaps we should.

In fact, Zenato explains that sharks are vulnerable for many reasons, the first being that they reach sexual maturity very late and have a low reproductive rate.

“In a perfect ecosystem, that works because that’s what sharks are supposed to fulfil in the web,” she says.

“But then along come humans; we put pressure on sharks and they’re not capable of adapting.

“We overfish and take away their food, we kill them when they become bycatch [the animals fishers catch incidentally while fishing for a different species] and we have the practice of shark finning [the act of removing fins from sharks and discarding the rest of the shark, which is usually still alive, back into the ocean].

“On top of that, there’s habitat destruction – we take away locations where the sharks can reproduce and keep their young.”

All of these factors combined disrupt the ecosystem and place a huge question mark over the future of sharks.

Zenato believes in the power of education, and is on a mission to share the hidden truths about sharks and the environment at large. 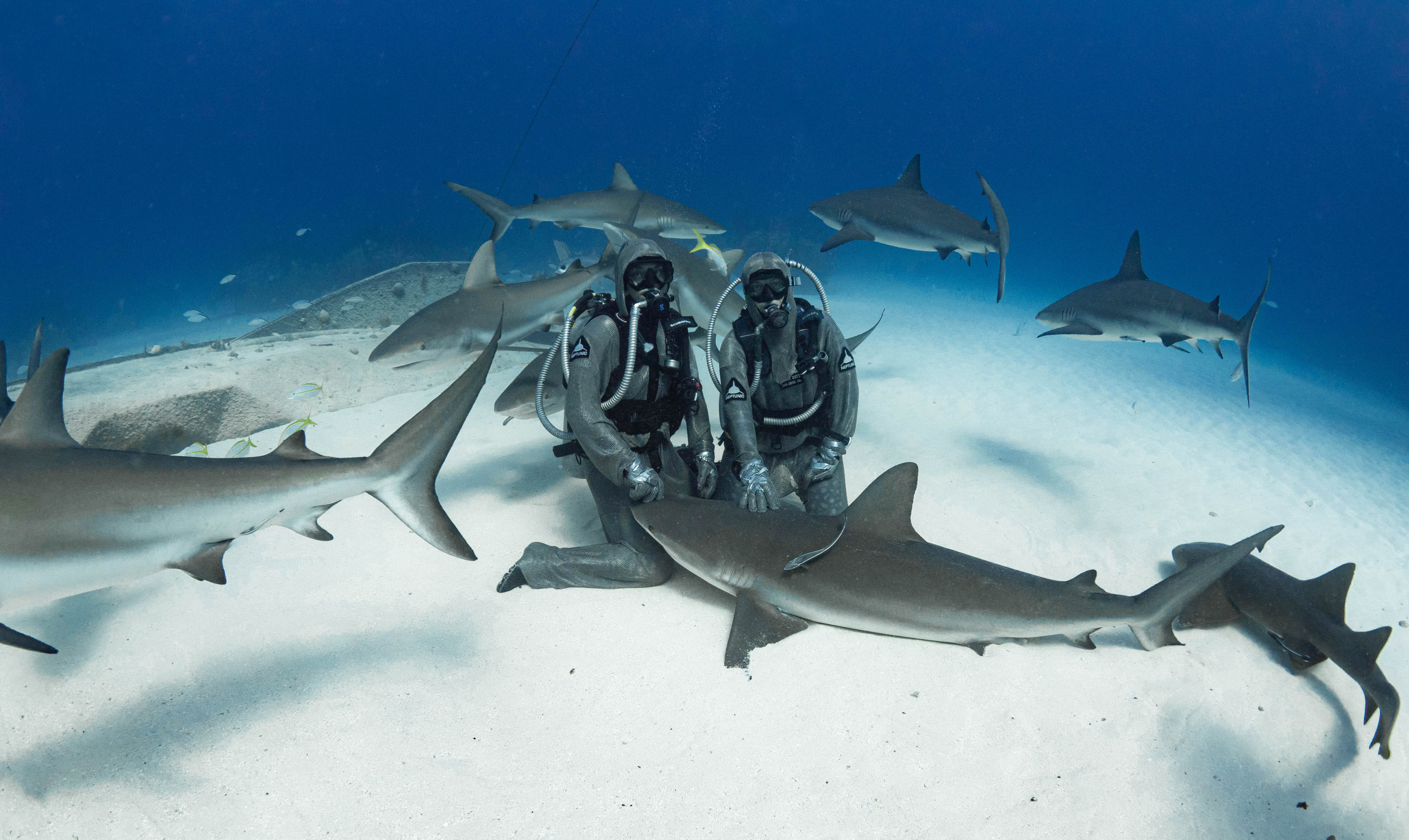 Cristina Zenato with one of her students. (Photo: Kewin Lorenzen)

Aside from her fieldwork and contributions to science, she’s a prolific speaker and has travelled the world spreading her knowledge.

She’s also the founder of People of the Water, a non-profit organisation designed to enhance the relationship between humans and the aquatic world through exploration, education and conservation.

“When I was growing up, women didn’t really entertain the idea of becoming professionals in this ‘dangerous’ field,” Zenato says.

“I’m super excited to see young girls telling me that they want to become oceanographers and environmentalists.”

Sharks have been around for 450 million years, since before dinosaurs, and have survived every major mass extinction event.

If we all take a leaf out of Zenato’s book, we can ensure they continue to not only survive, but thrive, in harmony with humans for many years to come.

Save This Shark airs on National Geographic on Foxtel, Fetch and Sky from September 15, 2020.