The real spaghetti bolognese... with tuna 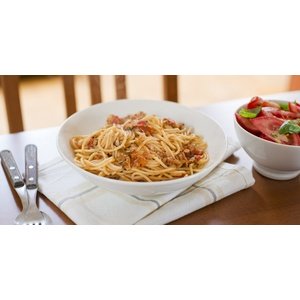 The Academia della Cucina Italiana released an official recipe for this spaghetti alla bolognese... using tuna, not ragù. According to the academy, the true traditional recipe from Bologna features spaghetti, tuna and tomato.

1. Heat oil in a large pan over medium/high heat and sauté the onion until tender.
2. Add the tomatoes. Reduce heat and simmer for 20 minutes.
3. Add the tuna and simmer for another 10 minutes or until the tomatoes are tender.
4. Meanwhile, cook the spaghetti in a saucepan of salted boiling water.
5. Drain the pasta and dress with the sauce.