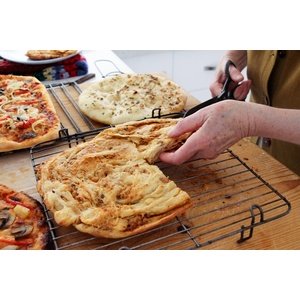 This is a traditional recipe using freshly cured salami meat (which we also make from scratch!) in a rustic focaccia base.

For the trays:
• Lard

1. Make the focaccia: mix together all dry ingredients before gradually adding water and stirring until dough forms.
2. Knead the dough for up to 15-20 minutes, adding water whenever it begins to feel firm, keeping it soft and pliable.
3. After the 15-20 minutes are up, stop adding water and instead fold and knead the dough into a ball, sprinkling with flour if too sticky.
4. Leave to rise in a warm place until dough has doubled in size (approx. 1-2 hours).
5. Grease several large baking trays with lard.
6. Divide the risen dough into individual focaccia portions, and knead each section a little more then leave to rise for another 30 minutes.
7. Take one portion and flatten/stretch by hand into a rough circle until it’s approximately 5mm thick.
8. Rub several teaspoons of lard over the base, then sprinkle salami pieces OR fried gristle, paprika, chilli and parmesan over the base.
9. Leaving the sprinkled dough flat on the bread board, use a sharp knife to cut into strips, then roll one strip up from one side to the other, turn over onto the next strip and roll back down, collecting the new strip as you go.
10. Repeat, rolling up and down all strips, using each new strip to seal in the sides up the previous roll. Finish with a ball, flatten slightly and leave to rest for 10 minutes.
11. Repeat with all dough sections.
12. Flatten the dough balls onto the baking tray, pushing and stretching as necessary. Bake at 200 ̊C (180 ̊C fan forced) until the focaccia is risen and cooked through. Check base to make sure it’s golden.
13. Slice into squares and serve.